NBA is Partnering with William Hills for Sports Betting

Ever since the repeal of the PASPA act, the NBA has been very active in finding sports betting partners.  Thus, it comes to no surprise to Gambling Industry analysist NBA is Partnering with William Hills for Sports Betting.  However, this time around its with a European giant in the gambling industry.

According to a Wednesday announcement by William Hill, they now the sports betting operator of the NBA in the U.S. Furthermore, this partnership gives William Hill the right to use official NBA sports data in their sports betting software platform.

On the other hand, the NBA will advertise William Hill on their official websites, apps and social media platforms. Both companies hop that by working together, they can “protect the integrity of the NBA games”. 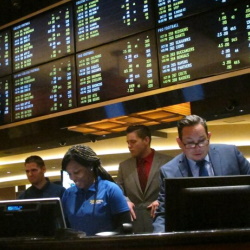 While the NBA is Partnering with William Hills for Sports Betting, it is not the first deal for them. Last December, the NBA made a sports betting partner deal with the Stars Group to be their second official gaming operator. Furthermore, last November the NBA also made a deal a betting data deal with Genius Sports and Sports Radar.

For William Hill, the situation is the same in terms of expanding in the U.S. Sports Betting Market.  This is because earlier this year, William Hill made a deal to be an official sponsor of the NHL.

Dan Shapiro, VP of strategy and Business Development for William Hill in the U.S. is very happy about this partnership. In addition, he said that this deal with the NBA will promote legal betting and benefits for everyone.

According to Shapiro, the NBA is a “leader in recognizing the benefit of a legal sports betting market”.  Thus, they expect to have a “long and mutually beneficial relationship with the league and its teams”.