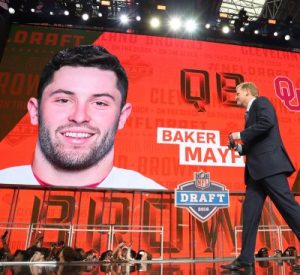 The last weekend of April is almost over which means that the 2018 NFL draft is also over.  In this years’ NFL draft we got to see some interesting drafting strategies from some unexpected teams.  In our 2018 NFL Draft Recap, we will go over the top takeaways that took place.

Anyone that has ever wanted to become an online bookie can tell you about the importance of the NFL draft. This is because sports handicappers use it to gauge future strategies of NFL teams.  In addition, the success of a team is all about finding the right player at the right time.

During this eventful three days, the most anticipated draft was probably when the Cleveland Browns selected Heisman winner Baker Mayfield. As always, quarterback drafting went pretty fast with four of them going within the top-10 picks.  On an interesting note, Lamar Jackson the Baltimore Ravens traded up for him at No. 32.

Here are our top Takeaways from the 2018 NFL Draft

In an unexpected move, the Steelers did not pick Rudolph, the QB from Oklahoma State until the third round.  This is because every sportsbook pay per head software expected to see Pittsburgh pick him during the first round.  Furthermore, the Steelers needing a QB to start training under Roethlisberger and Rudolph was the perfect fit.

The Browns Getting more than just Mayfield

This year marks John Dorsey first draft as the Browns’ General Manager and he certainly stuck to his game plan. The Cleveland Browns are a team that is in desperate need of leadership and a new look for its franchise.  They did this by picking Baker Mayfield who could potentially change the dynamic of the team.

In addition, the next big name Dorsey chose for the team is Denzel Ward, the top cornerback this year. Obviously, not everyone feels that this was the right move for the Browns because of a few controversies. However, many speculators agree that not adding Nick Chubb to their roster was a mistake.

The word on the street was that the Giants were looking to add another quarterback to their team roster.  The decision changed once the Browns too Mayfield under their wing leaving the Giants with some tough options. In addition, the Giants were committed to Eli Manning for a few more seasons and needed another franchise QB.  At the last minute, GM Dave Gettleman made their pick and chose to go with running back Saquon Barkley.