As we approach the NFL Playoffs, we thought it was time for a short history lesson. This is the must read guide for people who do not follow the NFL (National Football League) but need or want to know more about it. 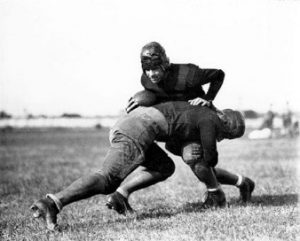 This article will give you the basic facts about the history of the NFL without going into details.  So whether you want to know more about American football because of a loved one or as a way to make small talk, this guide will give you everything you need to know about its history and  where it is at today in comparison to its former years.

This simplified guide to the history of the NFL will give you all of the basics to look like you are knowledgeable and interested in the game.  So after reading this guide, you will be able to show off your NFL knowledge at your favorite watering hole!

How did American Football Get Started?

American football is a derivation of the game of rugby that started in Yale University in 1879 by Walter Camp who is credited with instituting the rules of the game.

When did the NFL Start?

According to the best sports betting software company, The NFL had its humble beginning in 1920 under the name, American Professional Football Association which later changed to the National Football League in1922.

Here are a few facts to know about the American Professional Football Association to make you sound like a pro:

What’s in an NFL Season?

A regular NFL season is comprised of the following:

he NFL preseason which is also known as NFL Exhibition Season runs from early August trough early September.  These games are useful for new players as it allows them to play in front of a very large crowd.  In addition, it will give them experience playing in a professional environment.

In a Preseason game, veteran players will generally only play for a quarter of each game in order to avoid injuries.  The exception to that rule is during the Hall of Fame game  where starters will usually play for most of the game.

A normal NFL season is comprised of 256 games played over a 17 week schedule starting the first week of September.  Each of the league’s 32 teams plays a 16-game schedule, with one bye week for each team.

Most games are played on Sunday with a featured games on Monday nights and another game played on Thursday nights. The regular season will conclude with a full slate of 16 games on Sunday, December 31, all of which will be intra–division matchups, as it has been since 2010.

The NFL playoffs are a single-elimination tournament held after Week 17 of the regular NFL season to determine the NFL champion. In the playoffs, Six teams from each of the league’s two conferences qualify for the playoffs based on regular season records, and a tie-breaking procedure exists in the case of equal records.

The tournament ends with the Super Bowl, the league’s championship game, which matches the two conference champions.

The Super Bowl is the annual championship game of the NFL. It is the most watched sporting event in the United States.  Normally, Roman numerals are used to identify each Super Bowl, rather than the year in which it is held.

Since the inception of the NFL and its popularity growth, several movies have been made with football as its theme which include:

Facts to Make You Sound like an NFL Pro

The NFL and NCAA Football are probably the most wagered on sporting events in the United States.  In fact, several people have made their fortunes by becoming online bookies and taking bet on American football.