Rafael Nadal Advances to US Open Third Round

Rafael Nadal overcame an unfortunate accident in his second-round match against Fabio Fognini in the US Open. He hit his face with his racket in the fourth and final set. Thus, he received medical attention for his injured nose before the continuation of the match.

According to Sports Interaction sources, Nadal had a slow start. However, he managed to win against Fognini in four sets. The accident happened when Nadal returned a backhand to Fognini. However, his racket bounced off the surface and hit his face.

Nadal required a medical timeout to treat his bloodied nose. However, he managed to return to action and secure the victory. According to sports news reports, Nadal played down the injury. He said he felt pain but could still play through it.

Rafael Nadal Advances to Third Round 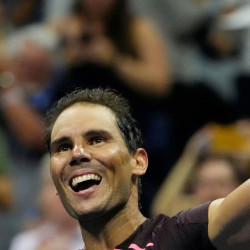 Nadal had 27 unforced errors at the start of the match. Also, he dropped his serve five times, including a stretch of four straight. He described it as one of the worst starts in his career.

The tennis superstar added that it was part of the game, and he needed to stay humble. Also, Nadal was suffering from a tough month. Thus, he knew that unfortunate stuff could happen.

After his victory, Nadal would face Richard Gasquet in the US Open third round. Gasquet would be an easy opponent for Nadal as the latter won all of their previous matches.

Becoming a bookie for the US Open is still possible with the good pay per head sportsbook. Sign up with PricePerPlayer.com today!

Rafael Nadal, Third Round, US Open