Things are heating up in Tokyo during Day One of the Olympics. Many people expect Novak Djokovic to win Olympic gold medal as he chases for the Golden Slam. First, however, he needs to cope with Japan’s humid weather.

The men’s singles tournament started, and Djokovic won against Hugo Dellien from Bolivia 6-2 6-2. However, Djokovic was not the only one complaining about the heat. Daniil Medvedev of Russia used a mobile air conditioner to keep himself from overheating.

Medvedev won against Alexander Bublik of Kazakhstan 6-4 7-6. However, the Russian star said that it was the worst heat he experienced while playing tennis. According to gambling software news reports, the temperatures last Saturday reached 34C in Tokyo. Also, humidity reached more than 80 percent. 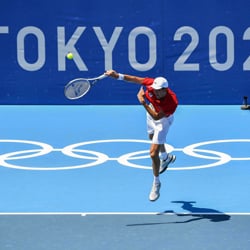 Djokovic said the conditions were harsh. Also, it was the hottest day they experienced in Tokyo so far. The hard courts absorbed and trapped the heat. Also, there was no breeze. Winds could help cool down the players. However, there were no winds on Saturday.

After winning Wimbledon, Djokovic is seeking the Golden Slam. He would be the second tennis player to achieve it after Steffi Graf. He needs to win all four grand slam tournaments and the Olympic gold medal in the same year.

Number 2 rank Medvedev suggested holding tennis matches later in the day when the temperatures are more relaxed. Djokovic agreed with the Russian superstar. Also, he said that there are lights on all courts. Therefore, it would make life easier for players if they move the schedule.

Djokovic said that he doesn’t understand why the International Tennis Federation opted to schedule games in the middle of the day. However, he is still on track to win an Olympic medal.

Are you thinking of becoming an independent bookie? Then consider signing up with PricePerPlayer.com. Also, read the gambling glossary to become a better bookie in no time.

« How to Protect Your Bookie Business
PricePerPlayer.com – Cheap Pay Per Head without Losing Quality »