The NFL postponed the Patriots vs Chiefs game after several players from both teams tested positive for the coronavirus. Patriots starting QB Cam Newton and Chiefs practice QB Jordan Ta’amu were the latest players placed on the NFL reserve list due to the virus.

The NFL postponed the games for Monday or Tuesday. However, the league will only let the teams play if there’s no other player to test positive. Newton started all three games for the Patriots this season. On the other hand, Ta’amu hasn’t played in a game. However, he had physical contact with starting QB Pat Mahomes and the other QBs.

It was the second NFL game this week postponed by the coronavirus. The league postponed the Pirates vs Titans match because some players tested positive. Also, the NFL pushed the Orioles vs Steelers game to November 1. 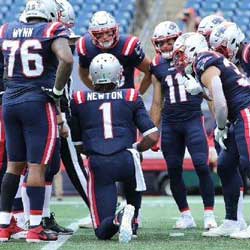 With Newton undergoing quarantine, PricePerPlayer.com sources expect Brian Hoyer to replace him on the roster. He was the backup quarterback for the past three games. However, it is still unclear how long Newton will be out.

If the Patriots and Chiefs play the game on Tuesday, it will put the Chiefs at a disadvantage for their match on Sunday against the Raiders. That means they are playing three games in nine days.

You should know about lineup changes if you want to start a sportsbook. Lines will change as teams make roster changes. In football, fatigue also plays a role in the results of the game.

« Effective Time Management for Your Sports Betting Business
Are All Bookie Pay Per Head the Same? »