Sports Bookie Opinions – Why Los Angeles is US Sports Capital

Many sports bookies agree that Los Angeles is the US Sports capital. The city has a special place in the hearts of sports fans. No other city has the star power that teams in LA have. Don’t just take our word for it. Just look at the world of sports and you’ll see that we are telling the truth.

For instance, Los Angeles has LeBron James, Paul George, Kawhi Leonard, and Anthony Davis. That’s just in the NBA. The city has two basketball teams with world-class talent. Several teams tried to lure Kawhi during the off-season but he picked the Clippers.

Cody Bellinger hit his 41st homer of the season that helped the LA Dodgers win over the Atlanta Braves last Friday night. He is leading the league in home runs this season. In addition, the Dodgers leads the league with 82 wins, according to a pay per head provider.

Stars in the US Sports Capital 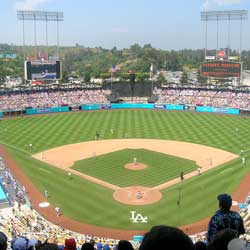 Hours after Bellinger hit his 41st home run, Mike Trout accomplished the achievement as well. He is part of the Angels, the other MLB team in Los Angeles. According to a pay per head blog, Trout is the AL MVP who is leading the league in slugging, OPS, and OBP.

The NBA opening night will feature a match between the Lakers and the Clippers. In addition, both LA teams will meet again on Christmas Day. With Davis and James in the Lakers and George and Leonard in the Clippers, it will be a rivalry that will be hyped up this season.

In the NFL, the New England Patriots remain supreme. However, it had to go through two Los Angeles teams to win the Super Bowl. The Patriots won over the Chargers in the AFC Divisional Round. Then it beat the Rams in the Super Bowl.

Both teams improved their rosters during the off-season so that they can bring the Super Bowl back to LA this season.

However, it is not legal to become a bookie in Los Angeles. Sports betting remains unregulated in the US sports capital. Hopefully, that will change in the near future.

« Bookie Tips: Things to Watch in Line Management
Bookie Guide on The Types of Bettors »