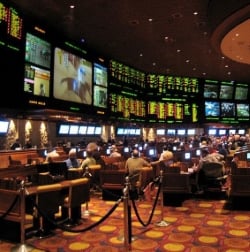 The attitude of the sports industry about sports betting has been changing at a rapidly over the past few months.  This is because ever since the overturn of the PASPA act, sports leagues have been changing their attitude towards gambling. The latest development comes from the NFL entering a Sports Betting Partnership with Caesars Entertainment.

Thursday morning, the NFL and Caesars Entertainment made an announcement about their first ever casino sponsorship by the NFL.  According to Sportsbook Pay Per Head companies, the announcement was made just in time for the NFL Playoffs.  This shows how money always brings the NFL to negotiation table as the timing is perfect for maximum profits.

The press release said that Caesars will be “providing unique experiences for NFL fans by using its casino properties”. In addition, the partnership will entail Caesars Entertainment the use of the NFL trademark in the U.S. and the UK.  Caesars will also be using the NFL trademark at popular NFL events like the Super Bowl and the NFL Draft. Thus, NFL fans will be seeing in the future a lot of NFL events being held at various Caesars properties.

A Change in Attitude for the NFL

The first is that the NFL finally saw that legal sport betting is good for their bottom line.  In addition, several NFL teams have already made gambling sponsorship deals which have proven to be very profitable for them. This includes the MGM and New York Jets partnership and even the Caesars partnership with the Las Vegas Raiders stadium.

Last year, the NFL made several comments about studying the impact of legal sports betting for the NFL. These announcements were made right after the overturn of the PASPA act.   Gambling industry websites made speculations that the NFL would make a decision after seeing how it affects other sports leagues.

In August, the NBA took the first step in a gambling partnership with MGM Resorts International.  The deal so far has shown that it did not hurt the NBA and actually made money for them. Thus, it is logical that the NFL would follow in their footstep to get their own piece of the pie.