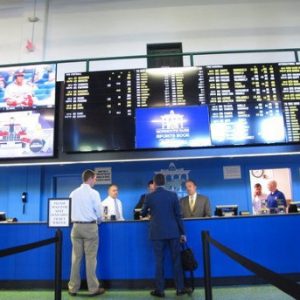 After one just one month after legalizing sports betting in New Jersey, the state is already raking in the money. According to a press release from the Division of Gaming Enforcement, New Jersey is making millions from Sports Betting.

Furthermore, New Jersey took over $16.4 million in wagers since June 14 which amount to about $3.5 million in revenue. This has lead to a huge increase over last year when sports betting was not legal in New Jersey.

A higher than average hold percentage for the sportsbooks

In addition, the sportsbooks at Monmouth Park and the Borgata saw a hold percentage of 7.8 percent. This hold percentage is actually higher than the 5.5% average found in Nevada.

“While it’s still early, we’re obviously off to a great start,” said Joe Asher, CEO of William Hill US.

William Hill is one of the sportsbooks that entered early in the New Jersey sports betting market.  They currently run one at Monmouth Park Racetrack’s Long Branch and one at Ocean Resort Casino.

However, according to sports betting software companies, several other sportsbooks are working towards getting a foothold in New Jersey.

The New Jersey Division of Gaming Enforcement is expecting even more growth in the months to come.  This is because sportsbooks only operated at a limited level during the month of June.  In addition, most sportsbooks did not start taking bets until mid June.

Thus, New Jersey expects to see more revenue in the upcoming months, especially with the NFL pre–season starting next month. In addition, internet gambling was up 14.9% at $139.5 million.