This last Sunday was a chaotic free for all for anyone involved in college football.  Fans, bettors and sportsbooks got to see a lot of action consisting of hiring and firing of coaches. 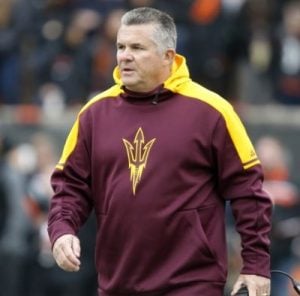 Some of the more visible firing included two coaches who were bringing their teams to a college bowl games.  Other schools went in totally opposite direction hiring coaches from within and outside of their ranks.

The day of mayhem started when Arizona State fired head coach, Todd Graham who had been with the Sun Devils for six seasons.  The news did not come as a shock to Graham. Despite having a 46-31 record, Athletic Director Anderson had been trying to move away from Graham for quite a while.

Texas A&M also fired its head coach, Kevin Sumlin despite having a 7-5 winning season.  Sumlin had been with the Aggies for six seasons with a 51-26 record.  According to Scott Woodward, the Texas A&M athletic director, Sumlin was fired because they are looking for someone who can take them to the “SEC championship on an annual basis”.

Texas A&M is looking to hire coach Jimbo Fisher from Florida State but are also looking at Chad Morris of SMU and Matt Campbell of Iowa State.

The big news was when Florida announced that it hired Dan Mullen as its head coach.  Mullen, after nine seasons with Mississippi State with a 69-46 record with the Bulldog will be a great addition to the Gators.  This news does not come as a surprise considering that the Gators have been looking for a new head coach since they lost Jim McElwain after the 2016 season. 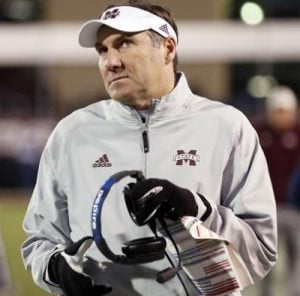 Mullen does have a history with Florida as he was part of two national championship teams in 2006 and 2008.

Mississippi State president Mark Keenum issued a statement wishing Mullen “nothing but the best in his future endeavors,”

On the other hand, the rumors are flying around as to who will be the next head coach for the Bulldogs.  They are several people that would fit that position.  Some of them include: Neal Brown(Trojans head coach), Mike Bobo(Colorado State) and Ryan Day(Ohio State Co-offensive coordinator).

Nebraska on the other hand was happy to hear the news as they are looking to hire UCF coach, Scott Frost who was on the list of possible head coach for Florida.

Matt Luke who had been named the interim coach for Ole Miss got his dream job at last.  Luke who has been the interim head coach since July, got the news Sunday night that Ole Miss is officially making him the head coach of the Rebels.

Luke interviewed for the position last Friday and has had the support of his players for a long time.  He comes from a family of Ole Miss support which include his father and brother who both played there.

This is of course not the end of NCAA football coach shuffling this year as we expect to see several more changes before the year is over according to some of the best sports betting software around the world.