It was a good day for Red Bull last Sunday. Max Verstappen won Azerbaijan Grand Prix to improve his lead to 21 points. Sergio Perez came in second. Also, he got extra points for recording the fastest lap during the race.

However, it was a nightmare for Team Ferrari. Both Carlos Sainz and Charles Leclerc had to retire during the race due to engine failure. Also, there’s a total of four cars with Ferrari engines that withdrew from the race. They are Kevin Magnussen of Haas and Zhou Guanyu of Alfa Romeo.

According to sports news reports, George Russell and Lewis Hamilton of Mercedes took advantage of Ferrari’s engine troubles. Russell finished in third place and Hamilton in fourth. Hamilton started in seventh place and was struggling with back pain. 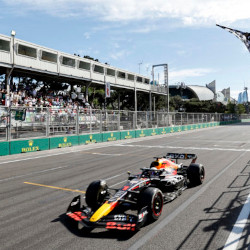 It was a redemption race for Verstappen. Last year, he crashed out of the race while in front of the pack. Although the win doesn’t make up for what he lost last season, it looked like luck was with him during this year’s race. The team managed the tires properly so they wouldn’t repeat last year’s mistake.

Leclerc said that the retirement hurt him and the team. He wants Ferrari to look into the cause of the failure so that it wouldn’t happen again. However, there’s little time for the constructor to fix the problems as they prepare for the Canadian Grand Prix.

You can learn how to open a sportsbook and accept wagers on Formula One races. You’ll be a successful bookie in no time.