Football is officially back!  The first NFL Sunday of the 2017-18 NFL Regular season is over and we saw some great action and some not so great action.  The sportsbooks were happy with the amount of action they took in from those 12 games and it’s time for a quick recap of the top games that took place. 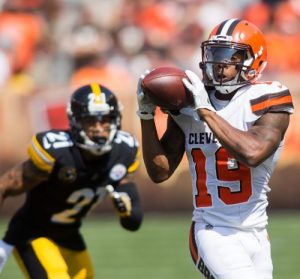 Before we get into some of the more memorable highlight, as expected, week 1 brought several injuries to some teams which included Allen Robinson of the Jaguars who suffered a knee injury playing against the Texans.  He has since then been diagnosed with a torn ACL which will certainly affect the Jaguars’ offensive power.

Cornerback Ronald Darby of the Philadelphia Eagles was carted off the field with a dislocated right ankle.  This was Darby’s first game with the Eagles and even though the x-ray where negative, he is still scheduled for an MRI today to check for ligament and tendon damage.

This is one matchup that was surprisingly a good and exciting watch.  The game ended 21-18 giving the Steelers their first win of the season but it also showed that the Browns are a much stronger team then last season.

Despite the many struggles Cleveland has had, they showed a surprisingly strong defense considering that they went against an NFL team that has one of the highest offense in the league.

As expected, the Falcons defeated the Bears but it was not the victory many online sportsbooks and sports betting software companies expected.  The final score of the game was 23-17 for the Falcons but they did not cover the spread.

The facts are that the Falcons got lucky that they did not lose this game a they were sloppy throughout most of the game which was also full of penalties.  We do have to respect that a win is a win and that the Falcons id outplay the Bears.

The only thing we can say about this matchup is that it was a blowout where the Rams annihilated the Colts with a final score of 9-46.  Most people that watched this game did not expect much from it as we were talking about two teams that just did not shine during the 2016 NFL season.

They were wrong as the Rams’ offense totally destroyed the Colts.  The question many people are asking is whether it was because the Rams have a much improved team or if it is because the Colts just suck this season.

« PricePerPlayer.com Rebrands itself with a New Website and Logo
NFL Betting Tutorial: How to Bet on the NFL »