Only two more days until the biggest fighting event Las Vegas has seen in a long time and the bookies are happy with the action they are getting from this fight. Even though the fight has not sold out yet, Las Vegas is still expecting to party like there is no tomorrow. 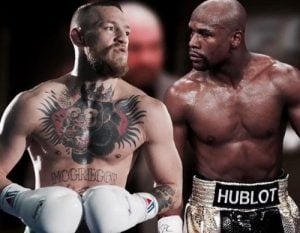 This fighting event of the year is bound to break every pay-per-view records and fighting fans and sports bettors alike are enjoying the last moment trash talk before the before these two fighters get into the ring. The fight will take place on August 26 at 9PM ET at the T-Mobile Arena in Las Vegas.

Several nightclubs have booked a long list of celebrities for the event and even boxing themed cocktails and appetizers have been made. The 18,000 seat arena still has plenty of tickets available ranging from $1,400 to $17,000. Fight promoters are not worried and expect all tickets to be sold by the time the weekend comes.

McGregor, the 28 year old Irishman became the first UFC fighter to hold two bets at the same time. Weighing 154 pound, McGregor admired Mayweather in his early fighting days. Today, here is what he had to say about Mayweather, “”Four years ago I fought in London at The Forum in front of about 500 people. Now here I am about to quadruple my net worth with one half a fight. Sign me up. No one is going to kick, knee or elbow. And it’s against this little b****.”

Mayweather on the other hand has for a very long time been the world’s leading boxer with a 49-0 record and is seen by many sports handicappers as one of the best defensive fighters. Even though this is up for debate, a win for Mayweather would make place him ahead of Rocky Marciano who also retired with a perfect 49-0 record.

On the betting site, sportsbooks in Las Vegas and around the world are ranting and raving about how this fight is nearing Super Bowl betting level in term of money being wagered on this event. Online sportsbook and sports betting software providers are saying that as a single betting event, there is a real chance that it will be ranked as #1 or #2 on the pointspread alone but that in any case, this is making boxing betting history.

For the moment, the largest fight to have that much betting on was the Mayweather-Pacquiao match that took place in May of 2015. The current odds as of today are:

From the side of the online bookies, it seems that they all favor Mayweather to win and it is just a matter of when.  On the fan side, a majority of them seem to think that McGregor will win based on several online polls.