Nikola Jokic had a triple-double on Thursday as he led the Nuggets to a 122-110 victory against the Thunder. The reigning MVP had 15 points, 13 assists, and 13 rebounds to earn his 79th triple-double. Also, he overtook Wilt Chamberlain for the NBA triple-double record for centers.

Despite his impressive accomplishment, the 27-year-old was not bragging about his new milestone. 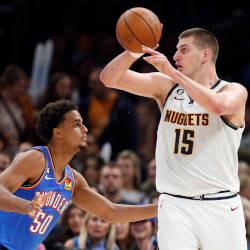 It was positive, according to Jokic, to be compared to one of the finest players. He said that it was an excellent legacy to leave behind.

Eighth-year NBA veteran Jokic struggled to get going against the Thunder on Thursday. He scored score just two points in the opening 20 minutes.

Aaron Gordon scored 27 points for the game. He led the Nuggets heading into the second half.

According to bookie software solution reports, the Denver Nuggets, who recovered from their loss to the Los Angeles Lakers, also received 24 points from Jamal Murray.

On Thursday, the Thunder rallied to take the lead at 95-93 going into the fourth quarter before the Nuggets retook the lead just before the buzzer.

In their next game against the San Antonio Spurs on Saturday, the Nuggets will have Jokic chasing down LeBron James, who has 105 career triple-doubles and is now sixth on the list.

Do you want to learn the correct way of managing an NBA sportsbook? Then, make sure you go to our bookie tutorials page.