Betting on NBA Rookie of the Year at a Sportsbook: Factors to Consider

Paolo Banchero is the favorite to win the NBA Rookie of the Year award for the 2022-23 season. He joined LeBron James and Kareem Abdul-Jabbar as top picks to score at least 25 points, five assists, and five rebounds during their NBA debut. However, when betting on NBA Rookie of the Year at a sportsbook, there are some things you need to consider aside from a player’s debut game.

On the other side of the court was Jaden Ivey. Although Banchero had 27 points to Ivey’s 19, the latter showed his potential as a defensive player. He held up against Banchero on defense.

The NBA is the only league where rookie players have a more initial influence. Rookies that make an impact usually join struggling clubs in search of inspiration. These guys are given control of the offensive and amass many stats that count.

They are not, however, alone. More than a few teams are using this strategy in the NBA today, which makes the battle for Rookie of the Year challenging yet fascinating. The award’s winner each season is determined by several variables, which bettors may use to predict winners on sportsbook software.

Betting on NBA Rookie of the Year at a Sportsbook 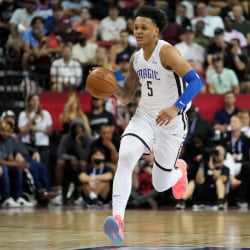 Your Rookie of the Year must be playing a lot of minutes. He will play a lot to accumulate significant counting stats, albeit perhaps not in the most effective way. But remember that the Rookie of the Year winners averaged 33.6 minutes from 2009 to 2021.

Find a player that can start with an open road and accumulate playing time every night. They won’t be substitutes; instead, they’ll have the ball in their hands and have longer leashes to play through errors. There’s no reason not to play the top rookies because they serve as the cornerstones of teams. Seventy rookies played an average of 30 minutes in each game between 2000 and 2021. 3.2 rookies each season, on average. Finding the Rookie of the Year is likely if you can identify rookies who will take the lead in their class in a matter of minutes.

MVP recipients are among the league’s best scorers. Although there are several considerations for ranking the league’s top players, scoring comes in first. The same is true for the winners of Rookie of the Year. 21 of the 32 winners between 1990 and 2021 were the top scorers in their selection class. The other seven winners scored second in class, while the other three scored third.

That concludes our basketball betting tutorial. Make sure you follow our tips in choosing the Rookie of the Year awardee this year. You can also use our guide when you run a bookie business. The information can help in your sportsbook conversion optimization process.