Brooke Henderson wins second career major in a fantastic fashion at the Evian Championship in France. She came back after two bogeys and a double bogey with three birdies in the last five holes. Thus, she won the tournament with a single-stroke lead over Sophia Schubert.

The birdie in the last hole gave Henderson the title. According to Sports Interaction sources, she became the first Canadian golfer to win multiple titles. Her previous win was at the KPMG Women’s PGA Championship in 2016.

According to sports news reports, it is Henderson’s 12th victory on the LPGA Tour. Thus, it extended her lead as the Canadian with the most wins. 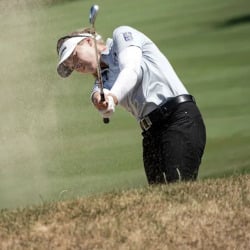 On the last day of the tournament, two shots separated Henderson from five golfers tied in third place. Also, her 71 was the highest number of strokes she recorded in the tournament after scores of 64, 64, and 68 in the first three rounds.

According to the best bookie management software, Henderson had a bad start. However, she stayed patient to get the result she wanted. She had a two-stroke lead going into the final round. However, her slow start opened the door for other golfers.

Schubert got the lead in the 12th hole. However, Henderson battled her way back to the top as they near the final hole. It was a disastrous start on the last hole when her tee shot went into the trees. On the other hand, Schubert earned a birdie.

However, Henderson regained her composure and got herself out of trouble. She made the eight-foot putt to avoid going into a playoff. Thus, she claimed her second major victory as her competitors and sister poured water and champagne to celebrate it.

« Michigan Sportsbook Industry Sees Less This June
What are the Best NASCAR Tracks for Betting? »