Lionel Messi is the Highest-Paid Athlete According to Forbes List

Despite an unsuccessful season, PSG star Lionel Messi is the highest-paid athlete this year. He earned $130 million before taxes. Thus, he is on the Forbes rich list ahead of Cristiano Ronaldo and LeBron James.

Messi earns $75 million from his soccer contract. Also, he gets $55 million from endorsements and sponsorship deals. It was his second time being on top of the rich list. The last time it happened was in 2019.

The top ten wealthiest athletes are all men. Also, they earned $992 million before taxes over the previous year.

Lionel Messi is the Highest-Paid Athlete 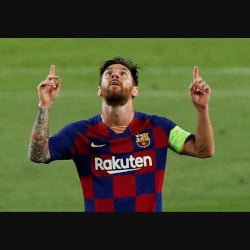 Messi has gotten criticism for some of his sponsorships outside the soccer field. Recently, he promoted tourism in Saudi Arabia. Also, he posted a photograph on his own Instagram account with the hashtag #VisitSaudi.

The nation has for quite some time been blamed for sportswashing to conceal its unfortunate human rights record.

NBA star James is second on the list with $121.2 million each year. The LA Lakers forward is not part of the postseason this year. However, he’s been prevailing off the court. He has a talk show and starred in the new Space Jam movie.

Cristiano Ronaldo is in third place after earning $115 million after moving to Manchester United from Juventus.

The Portuguese soccer star earns the same as Messi off-field. Also, a considerable portion of it came from his substantial social media presence.

Ronaldo has 690 million supporters across Facebook, Instagram, and Twitter, according to sports news reports. Thus, it allowed him to leverage his online presence for higher sponsorship deals from several companies.

A bookie pay per head blog said that Forbes uses several factors to compute the athlete’s net worth. They include salaries, bonuses, and prize money. Also, Forbes estimate consists of the athlete’s off-field revenue streams and sponsorship deals.

« How Realistic is it to Expect Legal Sports Betting in Texas?
2022 Preakness Stakes Betting Tutorial »