Saint Peter’s Stunned Kentucky in First Round of March Madness

Daryl Banks III scored 27 points as the little school from New Jersey paralyzed one of the most established college basketball programs in the US. Also, it was Saint Peter’s first men’s NCAA competition win in history.

On the other hand, Kentucky holds NCAA records for most men’s competition appearances, wins, and games played. 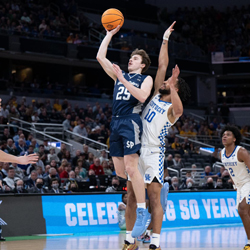 Saint Peter’s didn’t succumb to pressure. As a result, it pulled off the upset and ruined brackets across the globe.

Oscar Tshiebwe scored thirty points and sixteen rebounds for the Wildcats. However, Banks scored two free throws with over a minute left in additional time that gave Saint Peter’s the lead. Also, they protected it until the final buzzer.

The Peacocks, coming from a college of around 2,600 students, qualify for the round of 32. They will face seventh seed, Murray State. Also, the latter won against tenth seed San Francisco. The game also went into overtime. According to sports news reports, it is the Racers’ 21st win in a row. In addition, it is the longest active win streak in Division I basketball.

Do you want to become a basketball bookie? First, make sure you study how a sportsbook pay per head works. It can help you become a successful bookie in no time.