Billy Horschel won BMW PGA Championship on Sunday. He became the second American golfer to achieve it. Also, he won with a final round of 65 to finish with a 19-under par. He was a shot ahead of Laurie Canter, Kiradech Aphibarnrat, and Jamie Donaldson.

Horschel’s birdie on the eighteenth hole gave him the lead over Canter who was in the last pairing according to a sports betting platform.

However, England’s Canter could only get a par on the last hole. As a result, Horschel won the trophy. He is the second American to win the tournament, which put him alongside Arnold Palmer. 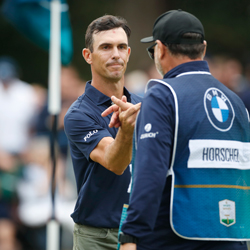 According to sports betting tutorials and news sites, it was a momentous occasion for the 34-year-old golfer from Florida. Although he didn’t qualify for the Ryder Cup team, he wasn’t bothered by it throughout the event.

During the start of the final round, he earned three birdies and no bogeys on the first nine holes. He felt the pressure building up during the last nine holes. However, he avoided getting any bogeys and earned four more birdies to give him the lead.

After winning the BMW PGA Championship, Horschel became the first American to be victorious at a Rolex Series Event. The total payout for the European Tour event was $8 million. Horschel won $1.33 million. The three golfers tied in second place received around $582,000 each.

Golf is one of the popular sports for bettors. You can operate a small sportsbook with the help of a pay per head solution, such as PricePerPlayer.com. Check them out today by clicking the banner below.