Patty Tavatanakit wins debut major by two shots at the ANA Inspiration. It was a life-changing moment for the 21-year-old LPGA Tour rookie. A few predicted she would be on top of the standings at the Mission Hills Country Club.

Tavatanakit stayed composed even when Lydia Ko was trying to overtake her on the leaderboard. Thus, she became the first rookie winner in the LPGA tour since 1984. After the event, Tavatanakit is still trying to come to terms that she won the ANA Inspiration.

Before the event, she was ranked 103rd in the world. She confessed that she dreamt of the moment since she was young. Earning a major win is a weird feeling for her. She didn’t expect to achieve it during her rookie year. 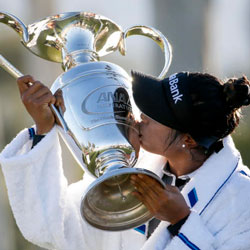 Tavatanakit was born and raised in Thailand. She started playing the sport as a teenager. Also, she added that she grew up watching other Thai golfers play, such as Moriya Jutanugarn and Ariya Jutanugarn. She said that they inspired her and other young golfers in Thailand.

Tavatanakit played for the UCLA golf team after moving to California. She enjoyed an excellent amateur career that included being the only amateur to be part of the 2018 US Women’s Open. Also, she turned professional the next year and won three Symetra Tour tournaments. Her performance earned her the Rookie of the Year Award.

In the first LPGA Tour event of 2021, she finished in fifth place. Then she won her first LPGA Major at the ANA. Also, her win came as bookies were celebrating the news regarding the New York sports betting license earlier in April. The future is bright for the young Thai golfer. In the HSBC Women’s World Championship, she finished in third place.

There are still many golfing tournaments this year. You can start understanding how to be a bookie today and start a sportsbook. Make sure you learn the gambling software basics to ensure the success of your venture in the long run.

« PricePerPlayer.com is Restructuring their Business with Lower Pay Per Head Prices
Using Your Pay Per Head Service to Help Organize Payouts »