UFC 261 returned a sense of normalcy in sports when it opened its doors to the public. Thus, a packed house saw the Usman vs Masvidal match. UFC President Dana White said that both the crowd and fights were terrific.

According to online bookie software reports, Kamaru Usman won his 18th match in a row. Also, he retained his welterweight title. He knocked out Jorge Masvidal in the second round. As the referee counted out Masvidal, the pro-Masvidal crowd was silent.

Usman’s KO win was his third one in the previous four matches. Also, it showed his versatility and flexibility. The former NCAA wrestler had only one KO win in his first ten fights in the UFC. However, he had three KO victories in the last 18 months. 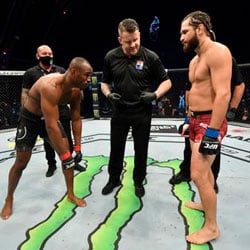 Usman’s 18th straight MMA wins included 14 consecutive wins since signing up with the UFC in 2015. According to sportsbook PPH solutions sources, his streak is second only to Anderson Silva’s winning streak of 16 UFC wins in a row.

Usman thanked Masvidal for pushing him. Also, he said that it was a long time since he was nervous before a fight. The fight was a rematch from their UFC 251 bout last July 2020. He won the match via unanimous decision.

However, Masvidal was a late replacement for that fight. He learned that he was fighting Usman six days before the event. Also, he had to fly across the planet to replace Gilbert Burns, who tested positive for the coronavirus.

During that match, Masvidal managed to go five rounds against Usman. The latter stomped Masvidal’s feet each time they were locked up. Some fight fans thought the contender had a chance to win if he had a longer time to prepare for the event. However, Usman proved doubters they were wrong after the KO win in UFC 261.

Becoming a bookie can be profitable if you accept wagers on UFC events. MMA fans love wagering on fights, especially when their favorite fighters are involved.

« We May See Sportsbooks in North Carolina Soon
PricePerPlayer.com is Restructuring their Business with Lower Pay Per Head Prices »