Tiger Woods Puts Season on Hold after Back Operation

Tiger Woods puts season on hold after he got a back surgery. It was his fifth back surgery in his pro career. According to Woods’ camp, he suffered from discomfort while playing at the PNC Championship last December.

He underwent a procedure to remove a pressurized disc fragment that pinched a nerve. According to sports news reports, Woods didn’t give a definite date for his return. However, doctors are confident that he would make a full recovery.

Woods added that he is looking forward to start training again. Also, he wants to get back on the PGA Tour. At present, Woods is ranked 44th in the world. His ranking would drop because he would miss some PGA Tour tournaments, including The Genesis Invitational and Farmers Insurance Open. Despite not playing in The Genesis Invitational, he would still fulfill his role as its host. 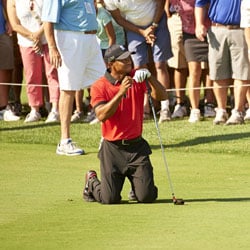 Woods’s last back operation was a spinal fusion in 2017. It took him a year to return to form, but he made a remarkable comeback that was capped by his 2019 Masters win. However, the pandemic and a back injury hindered his progress.

At present, Woods is tied with Sam Snead with 82 PGA Tour wins. He only needs one more win to take the lead. Golf fans hope that Woods would be back in time for The Masters in April. It is the first major of the year.

Woods took part in the PNC Championship, but his son overshadowed him. The father and son pair wore matching black pants and red shirts as Charlie showed that he inherited his father’s skills on the golf course.

A year is enough to be a bookie with a pay per head. It would be best to create a sportsbook with a PPH service if you had a couple of hours.