The Cleveland Browns are attempting to qualify for their first playoff since 2002. However, they are going into Sunday’s game shorthanded. The team updated the Cleveland Browns coronavirus list before its Sunday game against the New York Jets.

Cleveland announced that linebacker Jacob Phillips and wide receivers Rashard Higgins, Jarvis Landry, KhaDarel Hodge, and Donovan Peoples-Jones are on the reserve list. The announcement came after the team closed their team facility after a player tested positive for COVID-19.

Also, the Browns postponed their flight to New Jersey. A day later, the team placed BJ Goodson on the Cleveland Browns coronavirus list. The team also had to conduct contract tracing to find out who he had close contact with. 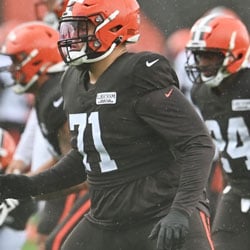 The NFL created the coronavirus list for players who tested positive for the virus and those exposed to it. According to Price Per Head Sportsbook reports, players who have the virus had to be on the reserve list for a minimum of ten days.

With several wide receivers out, the Browns only has Marvin Hall on its roster. Hall signed him off waivers earlier this month. Also, he has yet to play for the Browns this season. Thus, the team had to elevate WRs Derrick Willies and Ja’Marcus Bradley, and LB Montrel Meander from the practice team. They can play on Sunday against the Jets.

According to the biggest gambling companies, Cleveland has a 10-4 standing this season. They have the chance to end its 17-year playoff drought depending on the outcomes of the games during the weekend.

They qualify for the postseason if they win and Colts lose, Dolphins lose or tie, and the Ravens lose or tie. If they tie with the Jets, then the Dolphins and Ravens need to lose their respective games.

These are things you need to know if you want to learn how to become a bookmaker—understanding the roster changes before the game can help you determine if your odds are right or not.