The Clemson vs Florida State game was scheduled at noon ET. It would be the comeback game for quarterback Trevor Lawrence after testing positive for the coronavirus. However, both schools and the conference announced the postponement Saturday morning.

According to bookie tutorials and news sites, both teams’ medical staff can’t agree on how to handle the game. It came four hours before the actual start of the game. Clemson said that they followed the ACC protocol before the game. The school is looking forward to seeing action next week against Pitt.

On the other hand, Florida State said that their priority is the health of the athletes. They said that they would follow the health protocols set by the ACC. However, they felt that it was unfortunate that they didn’t see action last Saturday. 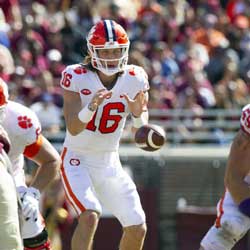 Florida State said that they hope that they can face Clemson in December. They thanked the ACC and Clemson for the support and coordination regarding the game. The school will now prepare for their match against Virginia.

Although their statements seem like they agree, that was not the case behind the scenes. The issue arose when a Clemson player tested positive for the coronavirus. Clemson shared the information with Florida State ahead of the game.

Florida State doesn’t want to play the game even if the ACC reschedules it on Sunday or Monday. On the other hand, Clemson intends to play the game in the next couple of days. Also, they claim that they are not at fault for the delay.

According to sources, the player tested negative twice during the week. Also, they didn’t do any contact tracing because his roommate wasn’t part of the trip. The team isolated the player right away when he tested positive for the virus.

« The Pay Per Head Bookie Guide to NFL Wagers
Will Legal Sports Betting in Ohio be Available this year? »