McGregor vs Pacquiao – Will It Happen?

Former UFC champion Conor McGregor announced on Twitter that his next fight would be against eight-division champion Manny Pacquiao. Although he announced his retirement last June, people hope that McGregor vs Pacquiao will be a reality.

McGregor stayed in the USADA testing pool. Also, he fought in the UFC twice in the last four years. He lost to Khabib Nurmagomedov via submission last October 6, 2018. His last fight was a win against Cowboy Cerrone last January.

Before his fight against Cowboy, McGregor said that he wanted to fight three times this year. MMA fans were happy to hear the announcement. However, eight months after the fight, it looks like McGregor’s next fight would be in the boxing ring instead of the octagon. 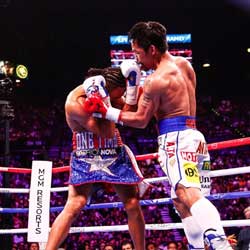 It would be the McGregor’s second boxing fight. In 2017, he lost to Floyd Mayweather in the tenth round via TKO, based on online bookie software reports.

Pacquiao is already 41 years old and a Senator in the Philippines. He is currently the welterweight champion after beating Keith Thurman last July 2019. Also, Pacquiao wants to unify titles with other champs in the division. However, he is open to fighting against McGregor.

According to Pay Per Head Blog, if McGregor vs Pacquiao becomes a reality, it would be the sixth common opponent between Pacquiao and Mayweather. The two boxers previously fought against Miguel Cotto, Ricky Hatton, Juan Manuel Marquez, Oscar De La Hoya, and Shane Mosley.

According to their manager, Audie Attar, talks are real between McGregor and Pacquiao. Also, the UFC is on board with the idea, which makes it easier for Team McGregor because the fighter still has an active contract with the UFC.

If the fight pushes through, it will take place later this year. You still have enough time to set up a bookie business. Find out how much money needed to be a bookie today and prepare for its launch before the McGregor vs Pacquiao fight.