Arsenal Wins FA Cup – What Fans Learned from the Finals

Arsenal wins FA Cup with a score of 2-1. The hero of the finals is Pierre-Emerick Aubameyang, who might be playing his last game for the team. He showed why Arsenal should try to keep him from leaving the club.

His contract will end at the end of the season. Also, he wants to play for a club that qualifies for the Champions League. Coach Mikel Arteta said that winning the FA Cup will show Aubameyang that the team is going in the right direction. 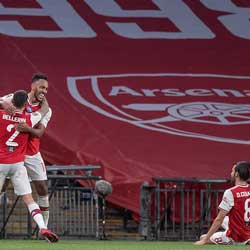 Bookie pay per head sources said that Christian Pulisic scored an early goal. However, Aubameyang won a penalty kick when he broke past Cesar Azpilicueta’s defense. The latter pulled the striker’s shoulder that caused him to fall in the area. He evened the score with the resulting penalty kick.

According to pay per head bookie service reports, Aubameyang scored the winning goal at the 67th minute with a quality finish against Willy Caballero. Chelsea didn’t get the chance to even the score since then.

PricePerPlayer Blog believed that Chelsea’s chances to win the match ended with Christian Pulisic’s injury. He scored five minutes after the first whistle, which was his 11th goal of the year. However, the American injured his hamstring in the 49th minute and had to be helped off the field.

Without the winger, Chelsea failed to get more scoring opportunities. Pulisic is the first American to score in an FA Cup Final.

Arsenal’s win improved Mikel Arteta’s reputation as one of the best young managers in the Premier League. He outmatched the more experienced Frank Lampard in the FA Cup Final.

« How Much Does a Bookie Earn?
Easily Manage your Sportsbook with a Pay Per Head »