Tyson Fury wins against Deontay Wilder in the WBC World Heavyweight match Saturday. Wilder’s corner stopped the fight in the seventh round. The rematch was 14 months after their first match that ended in a split decision draw.

The Gypsy King won the WBC heavyweight title from Wilder as a result of the match. He knocked down Wilder in the third and fifth rounds. As a result, Wilder’s corner threw in the towel in the seventh round to stop further damage.

Fury remained unbeaten in 31 fights. On the other hand, it was Wilder’s 11th defense of the WBC title. It was his first defeat to drop his standing at 42-1 with a single draw. Although he didn’t fulfill his prediction of a KO in the second round, Fury made sure his opponent knew who was in control of the match from the sound of the opening bell. 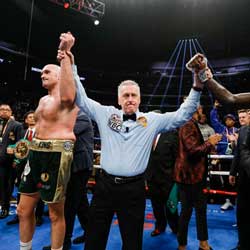 The champion’s courage is the only thing that made him last until the seventh round. Fury even praised him for that. He told a sportsbook software news site that Wilder has the heart of a champion. Although Fury knocked him down, Wilder didn’t give up and got back up.

Wilder had a chance to surpass Muhammad Ali’s record of ten heavyweight title defenses in a row. After the match, he protested the decision of his corner to stop the fight. Although he managed to knock Fury down two times in their first match, he couldn’t repeat it Saturday night.

Fury’s next goal is to fight Anthony Joshua, who is the reigning WBA, WBO, IBO, and IBF heavyweight champion. Their fight can unify the heavyweight title.

Before that happens, you can start a bookie business. Be sure to read our tutorials on how a pay per head work. That way, you can begin a sportsbook and accept wagers on boxing matches, such as Fury vs. Wilder 3.