Eliud Kipchoge is the World Sports Star of 2019. It is a fitting reward for the marathon runner, who finished a marathon in under two hours last October. He completed the course in one hour, 59 minutes, and forty seconds during the Ineos 1:59 Challenge in Austria.

Also, Kipchoge won the London Marathon for the fourth time in record fashion. He broke his record by 28 seconds.

Kipchoge topped the online poll over the likes of gymnast Simone Biles of the USA, cricket player Steve Smith from Australia, and Tiger Woods from the USA, to name a few. In 2018, the winner of the poll was golfer Francesco Molinari from Italy.

Who is Eliud Kipchoge? 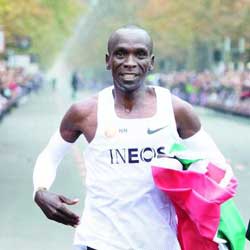 Eliud Kipchoge from Kenya is the most excellent marathon runner alive. Readers of PricePerPlayer.com know him for his achievements and inspiring qualities. Under the guidance of coach Patrick Sang, he won the U20 at the World Cross Country Championships in 2003.

During the same year, he won the 5,000-meter gold medal at the 2003 World Championships in Paris. He won against then running icons Kenenisa Bekele and Hicham El Guerrouj. Since then, he conquered the running world by getting the 5,000-meter bronze and silver medals at the 2004 and 2008 Olympics.

Known as The Philosopher, he started his marathon career in 2013 by winning the race in Hamburg. Also, he got second place in Berlin the same year. The winner, Wilson Kipsang, broke the world record that race. However, that was the only marathon defeat in Kipchoge’s career, according to Sportsbook PPH sources.

In 2014, he won in Chicago and Rotterdam. Also, he succeeded in Berlin and London the following year. In 2016, he won the London marathon before winning Olympic gold in Rio, according to Pay Per Head News.