The Milwaukee Bucks has the best record in the NBA Eastern Conference. Also, Giannis Antetokounmpo is improving all his stats. As a result, the Milwaukee win total increased from 57.5 in the preseason, to 60.5 points so far this season.

Sports analysts expect Antetokounmpo to have an MVP season this year. If the Bucks keep on winning and their superstar remains healthy, the team will most likely reach the updated win total.

Last year, the Bucks were first in point differential. They outscored their opponents by 8.8 points each game. This season, the team is performing better. They are still leading the NBA in point differential by 9.2 points. They won 60 games last year, and they will reach that milestone again this year if they keep their performance at the level they’re playing right now. 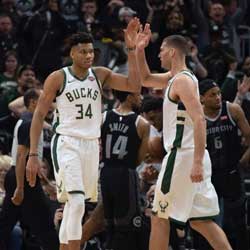 Another factor to consider is that the Eastern Conference schedule is more comfortable than that of the West. As the season goes on, the Bucks can easily beat the basement dwellers in their conference. Also, Antetokounmpo is going for the MVP award again with the way he is playing today.

Although James Harden and Luka Doncic are amazing this season, Antetokounmpo leads the MVP race so far. Last year, he won the award with 27.7 points, 5.9 assists, and 12.5 rebounds. This year, he improved all his averages with 31.1 points, 6.2 assists, and 13.7 rebounds.

If the current MVP provides that much firepower on the offense, there’s no reason why the Bucks can’t win more games than last year. Although 61 wins or more might be a lofty expectation, the reigning MVP might power his team to another impressive finish this year.

Also, sportsbook PPH insiders are pointing out Milwaukee’s unsung heroes. Eric Bledsoe scores 16.8 points a game, and Kris Middleton adds 18.3 points each night. Their numbers might seem low compared to their MVP teammate, but it is enough to help the team win in the Eastern Conference.

There is enough time to become a sportsbook agent before the NBA finals. The season has just started, and you can still accept prop bets and futures in time for the playoffs.