The Golovkin vs Derevyanchenko middleweight championship fight was a hard-fought one. In the end, Gennadiy Golovkin was the winner via a unanimous decision. As a result, he got the vacant IBF middleweight belt.

Golovkin told sports news outlets that Sergiy Derevyanchenko was a tough guy. It was a great experience for him. Also, he said that he understands he needs to train more because it was a tough fight. Although it was a hard-fought victory, it was still a victory.

After the Golovkin vs Derevyanchenko fight, the former is looking forward to another match with Canelo Alvarez. Although the two don’t like each other, fight fans are expecting it to happen soon. It will involve a large sum of money that will make the fight a win-win situation for both boxers.

After the Golovkin vs Derevyanchenko Middleweight Fight 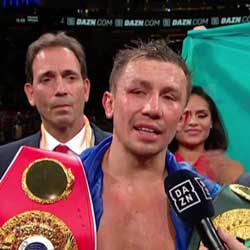 Golovkin told a sports betting platform that he is open to fighting anyone. Also, he said there are many great champions. However, if Alvarez says yes, then Golovkin will be ready for him. On the other hand, Alvarez will fight Sergey Kovalev next in November. The Golovkin vs Alvarez fight will depend on the result of that match. You still have time to become a bookie before the potential Golovkin/Alvarez match.

Golovkin knocked Derevyanchenko in the first round. In the second round, he opened a cut above his opponent’s right eye. However, Derevyanchenko responded by pressuring Golovkin. What fans thought was a sure-win for Golovkin became a closely fought boxing match.

It became an all-out brawl from the middle rounds. As a result, both fighters had nothing left in their tanks by the 12th and final round. They spent the last three minutes holding each other. When the fight ended, the judges gave Golovkin the win in a close decision. Most analysts agree with the judges’ scorecards.

« How Do Bookies Make Money
Sports Gambling and Streaming: The Choice Laptop for a Sweeter Experience »