Dana Altman has a huge Oregon basketball graduate transfer news. The coach got the commitment from Shakur Juiston, a 6’7” forward from the UNVL. During his junior year, Juiston averaged 10 rebounds and 14.6 points. However, he played just eight games last year due to an injury. He still managed to post decent numbers with 8.8 rebounds and 10.8 points.

Juiston was the top junior college prospect in the 2018 recruiting class. ESPN had him as the third-best graduate transfer this year. With the confirmation of the Oregon basketball graduate transfer, Juiston is eligible to play for the team right away. In fact, sports insiders are expecting him to vie for the starting position at either small forward, power forward, or center.

Aside from Juiston, the team also landed Anthony Mathis. The shooting guard from New Mexico can help the team this season. Mathis is 20th in ESPN’s graduate transfer rankings. As a bookie, it is important to consider the player movements alongside reading bookie tutorials to improve your bookmaking skills. 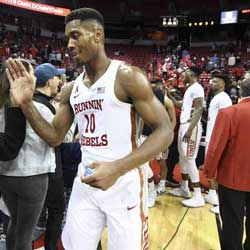 Juiston made a huge impact for UNLV during his rookie season where he played all 33 games. In fact, he had a double-double average during the year. As a result, he became part of the second All-Mountain West team.

During that year, he shot 63.9 percent, which placed him fifth in the school’s all-time single-season field goal list. Also, he was third in assists for the team with 1.9 average.

He played junior college at Hutchinson Community College, where he became the NABC Junior College Player of the Year in 2017. Also, he helped the school win a national title by averaging 12.1 rebounds and 17.3 points a game. In addition, he got 1.8 blocks and 3.9 assists.

According to pay per head news sites, Oregon made some interesting moves during the offseason. Their freshmen Louis King and Bol Bol, along with sophomore Kenny Wooten signed up for the NBA draft. Also, they lost Miles Norris and Victor Bailey Jr. Having good graduate transfers will provide a huge impact on the team.