US Survives France, England is Next in Women’s World Cup

Both teams showed impressive performances. As the final whistle sounded, US survives France with a 2-1 score. They will advance to the semifinals where they will face England.

The heroine for Team USA is Megan Rapinoe, who scored two goals. However, it was a tough battle as both teams tried their best to advance to the next round. With the win, the US has a ten-game winning streak in the tournament, according to sportsbook pay per head reports.

The US thought they already won the game when Rapinoe scored her first goal in the fifth minute. Then she scored again in the 65th minute, putting her team up 2-0. However, the scoreline doesn’t show how intense the game was up to the last minute.

The US Survives France 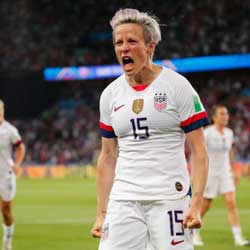 France broke into the score sheet when Wendie Renard got a goal in the 81st minute. They applied a lot of pressure and tried to score another goal. However, the US thwarted France’s strategy and advanced to the next round.

As the host, France had a lot of fans in the venue. In fact, it recorded the biggest attendance for this year’s World Cup at 45,595. France had 60 percent of the ball possession and had 20 shots at goal. On the other hand, the US only had ten. It was the first time the US didn’t dominate in both statistics in the 2019 World Cup.

In the other quarterfinal match, England edged out Norway 3-0. They will face the US on Tuesday. If the US wins, the World Cup final match will be on July 7. Their potential opponents will be Italy, Netherlands, Germany or Sweden. Betting software products are now accepting wagers on both quarterfinal matches.