Santa Anita is one of the finest race tracks in the world. However, its future is uncertain a month before the Kentucky Derby. Several deaths put Santa Anita under scrutiny as its officials failed to provide a valid reason for them.

The race track remained open since the most recent death that made sports news headlines last weekend. On April 6, it hosted the Santa Anita Derby, which is the stepping stone for 3-year old colts that want to be part of the Kentucky Derby.

Part of the 11-race card is the Santa Anita Handicap for older horses. Initially scheduled for March, the track was unavailable for almost a month. That’s enough time to learn how to be a bookie for dummies. 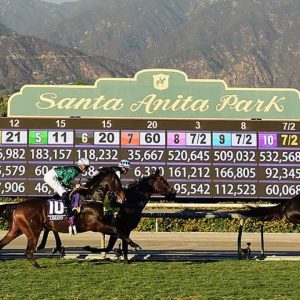 Last March 31, Arms Runner fell during a race and broke his right front leg. As a result, vets euthanized it. It was the 23rd horse death since December 26. Some people called for the closure of the track until officials provide a reason for the deaths. Among those who want to close the track are the Humane Society of the US, and other animal rights advocates.

The LA District Attorney’s Office is also investigating the deaths. The Stronach Group, the owner of the track, has started implementing safety and drug protocols for the horse. They want to reduce the amount of anti-bleeding drug allowed drug races. Also, they want to ban anti-inflammatory medications on the track.

Once the new regulations are in place, it will make the Santa Anita one of the strictest tracks in the US. In 2020, 2-year-old horses will not have any medications during race day. The same rules will be placed in Golden Gate Fields, another track owned by The Stronach Group.

All eyes are on Santa Anita as it tries to move forward after the horse deaths. Workers were left in the dark when the track temporarily closed for a month. Some even contemplated becoming a bookie to make their ends meet.