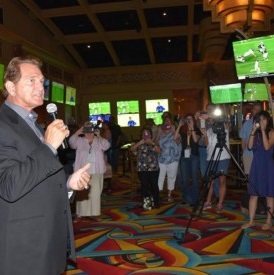 Legal Sports Betting in West Virginia officially began on September first and so far the numbers are looking good.  According to West Virginia Lottery, the state netted around $320,000 of taxable revenue from during the first week of operation.  Furthermore, they expect these numbers to greatly improve over the first weekend of the NFL season.

In addition, Hollywood Casino was the first to offer legal sports betting in the state of West Virginia. Furthermore, they reported $340,000 in bets during the first Saturday of college football. Several gambling venues are expected to follow with top pay per head sportsbook hoping to do the same within the year.

A Great Start with more to Come

According to Eric Zimny, VP for Hollywood Casino Racing Operations, “the taxable revenue product off of this was about $32,000”. This is from a tax rate of 10% from $320,000 in cash won from the bets during the first week.

However, the numbers will to fluctuate because payouts are not always immediate in some cases. This is because according to Zimny, “there’s a lot more volatility in this than in casino games or even racing.”

According to Sarah Slane of the American Gaming Association, there is big money from legal sports betting.  In fact, the NFL’s annual revenue may increase by $2.3 billion a year because of legalizes sports betting.

Furthermore, searches on How to Become a Bookie have actually increased in the past few months.  This means that several entrepreneurs are also looking to cash in on legalized sports betting in the U.S.

« The NFL May Get Billions from Sports Betting
Software Companies are thriving from Legal Gambling in the U.S. »