Yesterday, the Louisiana Senate committee legislation approved the right for riverboat casinos to move on land.  This is a big step for the casino industry in Louisiana as it would allow them to expand their operation.  In addition, it would allow them to have more gambling space thus increasing their profit margin. As the Louisiana Senate Panel approves riverboat casino gambling on land, it still leaves a lot work ahead of them. 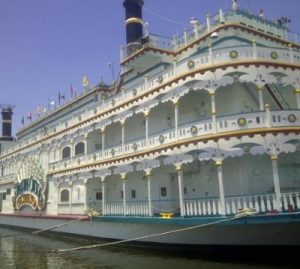 The Louisiana State Senate wants people to understand that this is not an attempt to expand gambling in their state. According to Senator Ronnie Johns, it is to modernize “an industry that has not had hardly any changes since 1991”.

The bill had problems passing the committee due to an issue about the lack of minorities in ownership and management positions.  Senator Johns said that the full Senate would not vote on this bill until the concerns were address by the gambling industry.

Now that the Senate Committee has approved the bill it will now go to the Senate floor.  Several gambling software companies are closely watching the debate because of its stiff opposition.  One of the bigger opposition groups are from religious leaders.

Opposition to the Bill

Several pastors and the conservative Louisiana Family Forum objected to the bill because of gambling addiction problems.  They stated that problem gambling costs the state 845-million dollars per year.

“Any expansion of gambling as this bill does will lead to more pathological gamblers in our state and destroy lives”, said a pastor from Ponchatoula, LA.

Also on last Tuesday’s debate agenda was the moving a riverboat casino to shallower waters Tangipahoa parish. The referendum would allow voters to decide whether to move the riverboat casino from Bossier City.