Since March Madness is just around the corner, now is the time to brush up on your basketball wagering skills.  Even though most people are hyped up about filling out their NCAA Basketball bracket sheet, others are ready to bet on tournament match-ups.  So let’s go over the basics with our College Basketball Betting Tutorial. 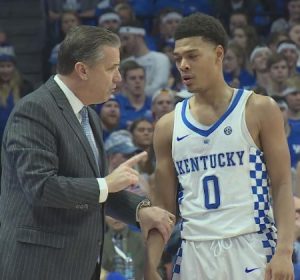 Teams that are not expected to win the game are referred to as the “underdog”. It’s fairly simple to win a pointspread wager on an underdog.  In order to win, the team needs to either win the game or lose by less points then the pointspread.

For example, let’s take a look at the big early season matchup of Michigan State vs. Kansas back in mid-November. The Jayhawks were listed as a 5-point favorite against the Spartans, meaning they would have needed to win by at least six points in order to cover the pointspread.

Michigan State backers would have needed their team to either win the game outright, or lose by four points or fewer. If Kansas had won by exactly five points, then the game would have resulted in a “push” where all wagers are returned in full. Michigan State ended up winning that game outright 79-73, meaning the Spartans covered the spread by 11 points.

Betting on the Favorite

Betting on the Money Line is a way to bet without having to worry about the pointspread. For this type of wager, you need your team to win the game, regardless of how big or small the margin of victory is.

For underdogs, a $100 wager will return the number listed. So for that game specifically, you would have needed to bet $215 dollars on Kansas in order to win $100. Michigan State bettors could bet $100 to win $185 if the Spartans won outright (which they did).

Betting on the Over/Under

The third type of popular wager in college basketball is the Over/Under (or total). For this type of bet, you can take  the Over or the Under in combined points scored for both teams. Overtime periods do count toward the Over/Under. Kansas and Michigan State combined to score 152 points in the Spartans win, falling a half-point short of the total.