We are less than two weeks from another NCAA College basketball tournament and the chaos is already starting.  The wild ride that is March Madness begins on March 13 this year and ends on April 2, 2018.  We thought it would be a good time to get in some March Madness early predictions and odds for those early bets. 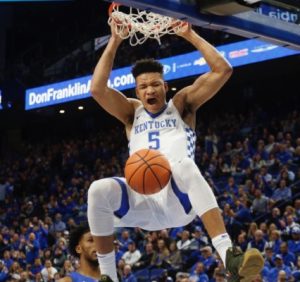 espite all of news about the corruption in the NCAA, the sportsbook reviews websites and handicappers still believe that high profile teams will win the tournament.  There is however, always the chance that a less popular team will win it all and this is what makes March Madness so exciting!

The NCAA Basketball tournament which began in 1939 is a 68 team tournament that has quite a bit of history.  Some of the more notorious teams to win the tournaments are UCLA with 11 titles followed by Kentucky with 8 titles and North Carolina with 6.

As we await Selection Sunday so we can all fill out our March Madness Bracket let’s get started on some odds and predictions.

Championship Odds on the top 10 teams

This year, Michigan State, Villanova and Virginia lead the pack in having the best chance to win the tournament.  It should come as no surprise that Duke is second followed closely by Purdue.

The Kentucky Wildcats will reach Elite 8

The Kentucky Wildcats are a team with a lot of fans and a lot of hype.  According to the best bookie pay per head in the world, they have an excellent chance to make it to the Elite 8.  This is because they have 5 players that average over 10 points per game.  In addition, the freshman laden team just had a 4 game winning streak and they are ready to win it all.

Watch Out for the Nevada Wolf Pack

The Nevada Wolf Pack has never been known for contender during March Madness.  In fact, they have only made it to the second week of the tournament once.  This year might be different for this team and they may just destroy your bracket.

We don’t expect them to reach the Final Four but they may make it to the Sweet 16 with Caleb and Cody Martin at the helm.   In any case, they have been receiving a lot of praise lately winning 8 of their last 9 games.

If they can get a No.6 or No. 7 seed, we might just see the Wolf Pack go beyond round two of the tournament.