What the Florida Amendment 3 means for the Gambling Industry

A few days ago, a proposed constitutional amendment meant to limit the expansion of gambling in Florida received enough signatures to be placed on the 2018 ballot.  For the residents of Florida, the Florida Amendment 3 means that they get the final say on any casino-style gambling. 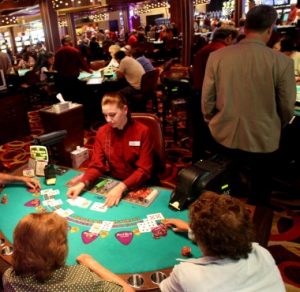 This means that if Amendment 3 gets the votes in the 2018 November ballots, any form of casino gambling would require voter approval which is currently controlled by the state Legislature.

Amendment 3, also known as  the “Voter Control of Gambling Amendment” was for the most part supported and bankrolled by Disney and the Seminole Tribe of Florida.  The proposed amendment needed 766,200 signatures to be placed in the 2018 ballot and so far has received 817,766 valid signatures.  The next step for the chairman of  “Voters in Charge”, the committee behind the amendment proposal say that now that they have enough vote, it is time to “turn our full attention to building voter support for our amendment, and in the coming days e will formally launch our campaign for passage of Amendment 3.”

This is a concern because the state Supreme Court has also since ruled that counties passing referendums to allow slot machines are still not able to offer them.  This is because they are no state gambling law that gives them any authority to regulate slot machines in any county.

Now that the Amendment is set for the November ballot, we can expect the gambling industry which includes some of the best gambling software companies in the world to not go down without a fight.  Many gambling experts speculate that if the amendment passes, it would give the Seminole casinos an unfair advantage.  This would give them the ability to do as they wish without any real competition in Florida as other gambling companies would have to be at the mercy of the Florida voters.

At the moment, the Seminoles pays Florida $250 million a year and have exclusive rights to offer banked card games such as blackjack. If the amendment passes, it would allow them to keep their monopoly until 2030 while at the same time make it difficult for the Florida Casino Industry to add new games like fantasy sports betting.

The Florida gambling industry would need a 60% voting favor from the residents of Florida to regulate them.  This would make it very difficult for the industry to grow if they need a vote for any decision to be made.