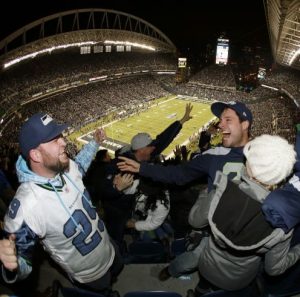 Perhaps the most influential factor sportsbooks use when making the lines is how NFL Football bettors perceive NFL teams. There are a number of items that influence public perception, including a team’s straight up record and scoring numbers, but the biggest factor in influencing public perception is what NFL bettors hear about that team on television and radio.

This is a more advance NFL Betting tutorial but well worth knowing as this NFL betting strategy has been proven to really affect how the odds can work in your favor.

It’s important to remember that most sports bettors get their information from the likes of ESPN and other known football handicapper, and anything they hear on the radio – true or not – is what they believe. If the networks and website of ESPN say that one team is better than another, then you can expect to see a ton of action come down as instructed.

Case in point recently when the New England Patriots took on the Tampa Bay Buccaneers.  The Patriots had recently lost against the Panthers in a match-up that should have been a give me.  Sports handicappers, News websites and even sports betting software companies were talking about how the Patriots were defenseless and that the Buccaneers ha a great new kicker that would even out the odds.

The online sportsbooks took notice, and listed the Patriots as only a 4.5 point favorite against a Tampa Bay team that Tom Brady has beat by at least a touchdown in all match-ups since he started with the Patriots.

Because the typical football bettor who gets their news from ESPN and other sports websites heard all week long about how bad the Patriots’ defense had become because of last week’s game. Those online sportsbooks cleaned up as the Patriots did not cover that game..

While we do respect the opinion of some in the national media, as well as some on ESPN in particular, the true value of watching ESPN on a daily basis isn’t the information gained, but rather knowing how other sports bettors will be leaning during the upcoming weekend, and therefore knowing how the linesmakers will react.

It’s not a good idea to simply fade public perception 100% of the time, but jumping on a line that is a few points off simply because of what people see and hear on television is going to pay off in the long run.

Trust your own NFL Football Handicapping – don’t be swayed by public opinion and bet on the nfl based on your research. We’ll be back soon with another NFL Football Betting Tutorial.