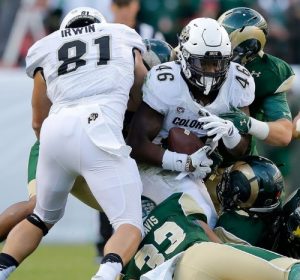 The first week of the 2017 college football season started last night when 30 teams went head to head to earn their first won or loss of the season.  This Labor Day Weekend will prove to be as exciting as ever with some great rivalries match-ups that will take place Saturday.

Our resident and handicapping odds experts are having their say at the office cooler as to who will win and who will lose.  We thought that we would share their predictions with you so that you can make some Labor Day Weekend money!

Let’s start by giving you the low down on one of tonight’s game!

In this in-state match-up that will take place at 8m ET, this is one of the games underrated games for Week 1 as it is not a big rivalry between these two Pac-12 teams

However, football popularity has been on the rise in Colorado so expect to see a lot of home team spirit during the game.  Colorado has already had already shown that it has what it takes to be a contender this season but can coach Michael MacIntyre pull it off for the entire season?

Last year Colorado destroyed Colorado State in a 44-7 victory but Colorado is now out for revenge.  This year will be different as Colorado has lost a lot of players in its defensive line in addition to losing Jim Leavitt.

This will be a close game and Colorado the favorite will not cover the -3.5 spread.

This is going to be one game not to miss as No.17 Florida takes on No. 11 Michigan at 3:30PM in Arlington, TX.  Despite having several holes to fill in its roster, Michigan is still a -5 favorite with the sportsbooks.  Florida despite having a strong balanced team will have a starting quarterback that has never played against the Michigan defensive line.

Most football handicappers are split on this one but we will take the lunge and tell you that Michigan will not only win but will also cover the -5 spread.

Notre Dame which has a long tradition in football is coming back after a 4-8 season giving Coach Brian Kelly a lot of pressure as he tries to turn around his team.  On the other hand, The Owls went 12-2 against the spread last making many Temple fans a lot of money.

The favorite team is of course Notre Dame with a -18.5 spread but many believe that betting on the Owls is a sure bet as they will probably cover the spread with their history of being the underdog that could.

Even though the big game to watch is probably the Florida State-Alabama matchup our experts at the best sports betting software company have decided not to make a prediction on this game.  Sure, Alabama is the favorite with a -7 spread but if a team can beat them, its Florida State.

So from everyone at PricePerPlayer.com, enjoy this Labor Day weekend full of College Football Action!

« 2017 NFL Week 1 Early Predictions
PricePerPlayer.com Rebrands itself with a New Website and Logo »