When the Floyd Mayweather and Conor McGregor fight was announced back in June of this year, the bookies were pretty fast to place Mayweather as the underdog with betting odds ranging from +500 to +400.  As the weeks went by and it was announced that McGregor would be fighting on August 26 using boxing rules the table were turned around and the betting odds changed from Mayweather with the advantage making him the favorite at -2500 and McGregor the underdog at +1100. 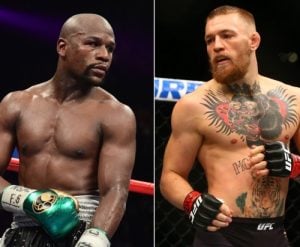 Many bookies and sportsbook software providers have been more than happy to take provide betting odds on this fight but believe that most bettors will probably not get much value from this fight as the odds will probably go back and forth in four digit numbers until Mayweather becomes the logical favorite.

This is exactly what has happened where the odds seemed to level off with McGregor at +500 and Mayweather at -600. On Monday, the Westgate Las Vegas Superbook took in large bets on McGregor changing the odds on McGregor to +450. Several online bookies followed suit and the current odds as of July 25 are ranging from -550 to -720 for Floyd Mayweather and +375 to +545 for Conor McGregor

Even though the majority of sports handicappers are confident in the outcome of the match, the odds continue to fluctuate because of the emotions behind this fight.  In one corner you have the boxing fans and in the other you have the MMA fans who are not just running their mouth but actually opening their wallet in hope that an upset will take place.

For those who like to bet on boxing and MMA match, the fun betting comes from the prop bets which several online sportsbooks are offering such as:

Several boxing celebrities of course have their own opinion of the match Oscar de La Hoya thinking that this is a bad idea for boxing wanting people to boycott the fight to Mike Tyson saying that McGregor will get killed and that he should be allowed to kick during the match to even out the odds.